Women's History Month and the Power of Female Funeral Professionals

Women’s History Month began in 1987 and is dedicated to celebrating the often-overlooked contributions that women have made throughout history. This year, the National Women's History Alliance announced the theme, "'Providing Healing, Promoting Hope,' [as] both a tribute to the ceaseless work of caregivers and frontline workers during this ongoing pandemic and also a recognition of the thousands of ways that women of all cultures have provided both healing and hope throughout history."

In 2011, the White House issued a report on the progress women had made in the U.S. since the 1960s. They found that young women are more likely to have a college degree than young men and that the labor force is made up almost equally of men and women. This trend impacts funeral service as well. Today, more than 60% of mortuary science students are female, with more and more funeral homes owned and managed by women. Learn more about three women who are leading the change for female funeral professionals.

Whitney (center) and her team pose in their funeral home in Tupelo, MS.

Whitney Pegues-Beck is a fifth-generation funeral director and vice president at W.E. Pegues Funeral Directors in Tupelo, MS. Her great-great-grandfather opened the original funeral home in 1891, which makes her funeral home the oldest continuous retail business founded in the area. Whitney joined the staff in 2013. “Growing up, I always assumed I would go into the family business,” she said. “After graduating from the University of Mississippi with a degree in business administration, I moved to New York City to get some experience outside funeral service. Four years later, I moved back to be more involved.” Whitney quickly discovered her enthusiasm for funeral service. “As I’ve become part of the funeral business, I’ve realized that funeral service is my passion and my business degree is what I needed to do to get here.”

Whitney and her team were also among the first funeral homes to utilize eFuneral, a subsidiary of Homesteaders that offers a unique, digital solution to attract, convert and close preneed and at-need sales online. “This is the new consumer. They don’t necessarily want face-to-face interaction, they want to do their planning from the comfort of their own home where no one is putting them on the spot. It’s a new generation that has come about, and we’re hoping eFuneral will further our current preneed business in the coming day and age.” 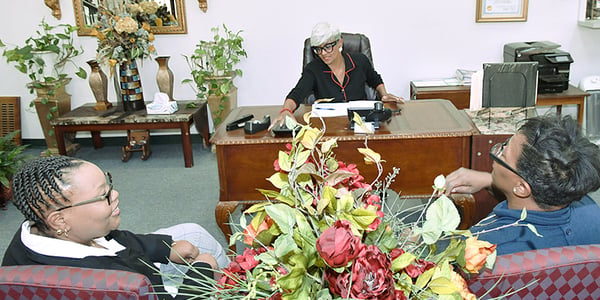 Audrey Howard-Harris and two of her staff members have a meeting in their Lawton, OK, funeral home.

In 2007, they were honored to care for a Hollywood celebrity. They had served another family member several years earlier, and the family wanted to bring the service home to Oklahoma rather than stay in the Hollywood spotlight. They remembered the level of service and professionalism Howard-Harris Funeral Services provided years before and wanted the same service again. The Hollywood spotlight followed them to Oklahoma City.

The funeral service brought national and international attention to the firm and staff, and Audrey in particular. Following the media attention, she was contacted by several organizations asking her to join as one of the top female funeral directors in the area. Audrey graciously declined, “This is not about me, it’s about the families we serve. All of our families are special.” 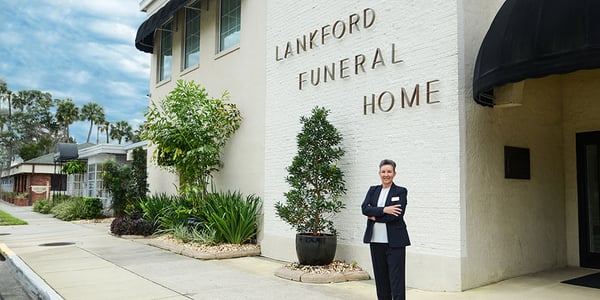 Cheryl Lankford stands in front of her Florida funeral home.

Cheryl Lankford was born and raised in her family’s funeral home. Her father was the funeral director and her mother was a registered nurse. In the many hours she spent with her grandmother, she was encouraged to take an interest in her father’s business. She was inspired to attend college and obtain her degree in funeral service after her grandparents were tragically killed in a car accident in 1976. After working in another funeral home for many years, Cheryl returned to the family business in 1996 and eventually purchased Lankford Funeral Home and Crematory in 2018.

Being a woman in the funeral profession has been difficult at times, especially when trying to create a team atmosphere. “It was a challenge for many years working with gentlemen who were not wanting to work with a lady as an owner,” Cheryl explained. “Now, you have ladies who are owners of NFL teams and basketball teams, and it’s becoming more mainstream. In this society, we’ve come so far to be a person in the business, and we just want to share that with everyone.”