Each fall, many people prepare to recognize holidays dedicated to remembering those who have died. One of those important traditions to honor departed loved ones is Día de los Muertos, or Day of the Dead. Observed around the world, especially in Mexico and by people of Mexican heritage, the annual festival celebrates deceased friends and family members.

As funeral service professionals, It’s important to become familiar with the many different traditions that accompany Día de los Muertos. Homesteaders’ marketing partners Nancy Vasquez and Eloy Marroquin of Funeral Marketing Directors shared more details about the significance of this observance and recounted their own experiences celebrating Día de los Muertos in Mexico and the United States. Keep reading to learn about the holiday’s key components and how your funeral home can support those who celebrate Día de los Muertos.

When is Day of the Dead?

This year, Día de los Muertos will be celebrated on November 1 and 2. The holiday starts with Día de los Angelitos (Day of the little angels) at midnight on November 1. On this day, the spirits of all the deceased children are believed to be reunited with their families for 24 hours. The festivities shift the following day – November 2 at midnight – to honor the lives of the departed adults, called Día de los Difuntos. The grand finale and public celebration of Día de los Muertos – spirits of all the dead – takes place on November 2 at noon. On these days, it’s believed that the gates of heaven open so the souls can return for one night to spend time with their families. It is believed that during this time that the living and the dead can mingle.

According to Nancy and Eloy, contrary to the views Americans have of death and spirits on Halloween, Mexican cultures believe the souls of the deceased return to help their families. Día de los Muertos is seen as a triumph over death and becomes a celebration of life. Those celebrating the holiday do not see death as something to be feared, but as a necessary continuation of life and day of remembrance and respect.

Day of the Dead Traditions

In Mexico, people celebrate their loved ones with several traditions meant to honor their lives.

A very important part of Día de los Muertos is the altar, or ofrenda – the offering. The ofrenda holds symbolism from both native traditions and Catholic beliefs. It’s not for worshipping the dead, but for honoring them.

Traditionally built inside the home, the altar can be as big or small as the family can accommodate. Each altar is unique, but all have distinct aspects which hold different symbolic meanings. Depending on the family’s needs, the altar can have two to seven levels, representing the different stages of life and the afterlife. Each level is covered with a tablecloth and decorated with papel picados – artistically cut tissue paper that represents the wind. A photo of the deceased is placed in the very center of the altar and is surrounded by his or her favorite things – such as food, drinks, candy and toys for the children. 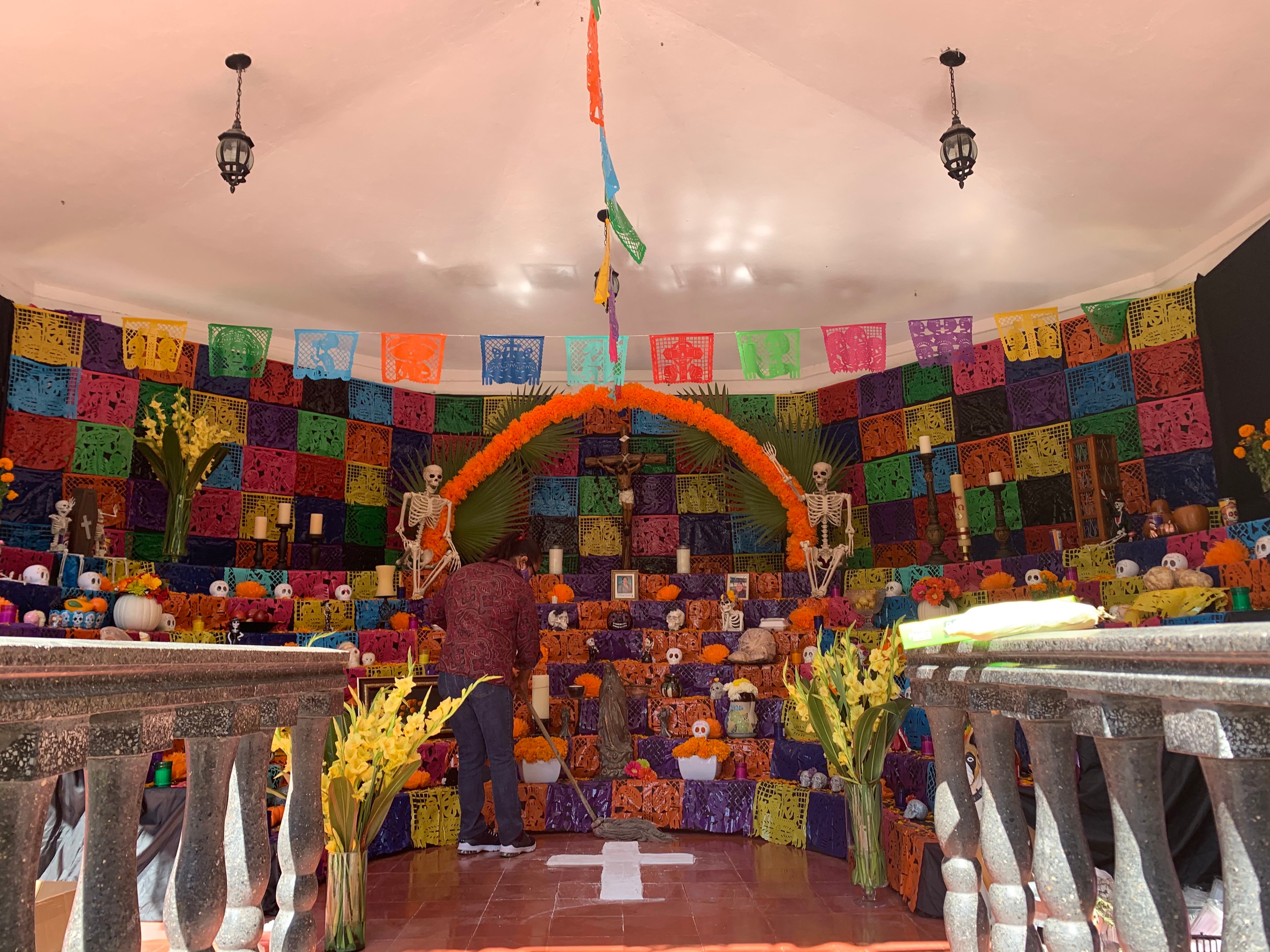 An altar decorated for Día de los Muertos
(Photo courtesy of Nancy and Eloy, taken on a previous trip to Mexico to celebrate the holiday.)

When the souls of loved ones return, family members want to provide the best presentation possible. It is believed the first place the dead visit is their gravesite. To prepare for their return, families will spend days cleaning the graves of the deceased and decorating them with cempasúchil, candles and photos. Nancy and her aunt preparing her mother and father's gravesite
(Photo courtesy of Nancy and Eloy, taken on a previous trip to Mexico to celebrate the holiday.)

They want the spirits to know they are welcome, so the families leave gifts such as food and drink for the adults and toys for the children. Many families will also sleep beside the grave to spend time with the returned souls. It is not uncommon to see families playing games and eating by candlelight during Día de los Muertos. 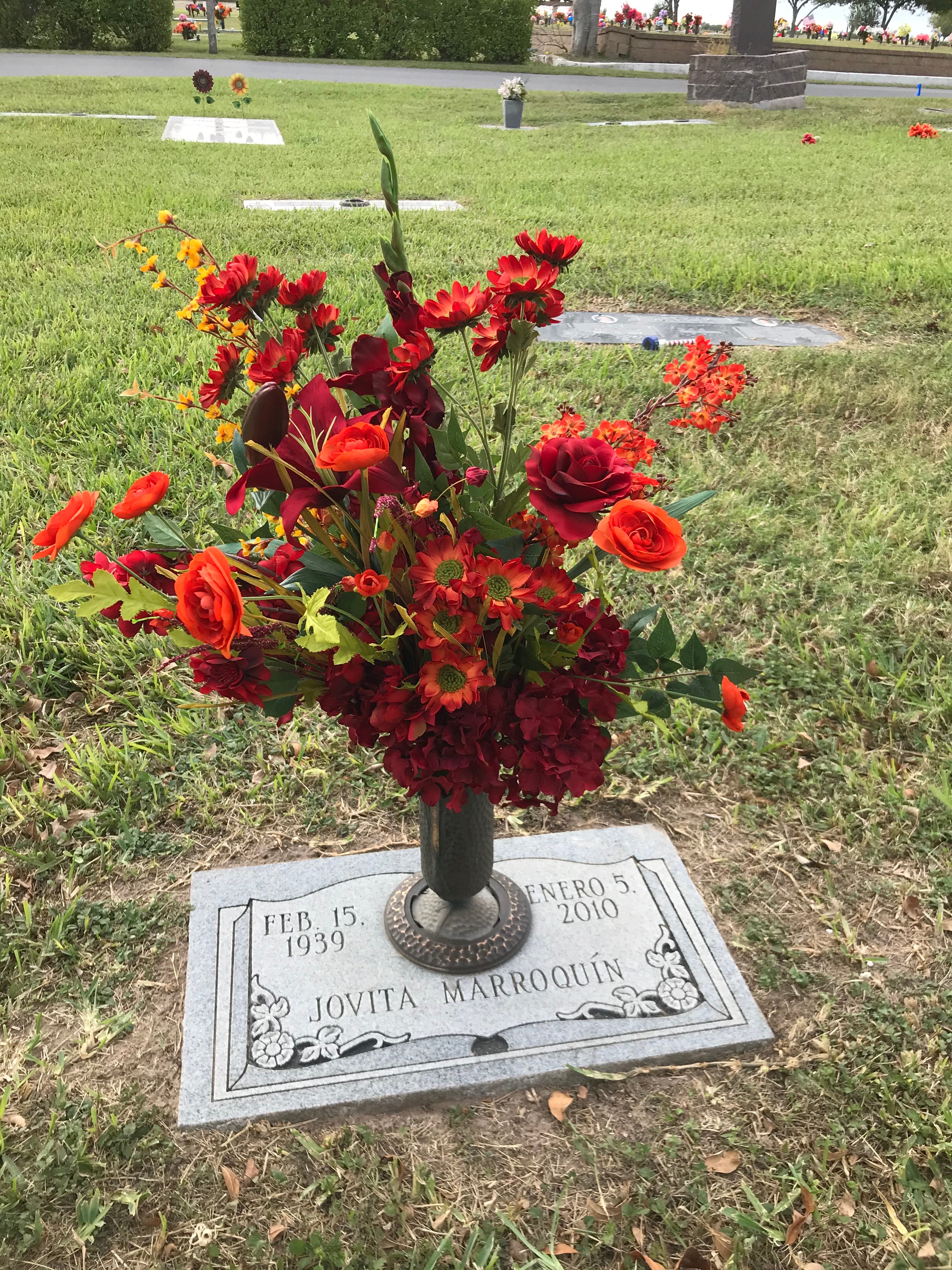 Flowers at Eloy's mother's gravesite
(Photo courtesy of Nancy and Eloy, taken on a previous trip to Mexico to celebrate the holiday.)

Each region of Mexico and Latin America celebrates Día de los Muertos a little differently. When celebrated in the United States, Nancy and Eloy explain that the holiday is often much more reflective and quieter. People will typically put up an alter or decorate a room in their home to remember their loved ones. All observances are unique but have the same idea about death – it is something to be celebrated, not feared.

How Funeral Homes Can Celebrate Day of the Dead

Over the years, celebrating Day of the Dead in America has become more widespread. As part of their work, Nancy and Eloy aim to help educate funeral homes on ways they can participate in Day of the Dead celebrations to support those in their community who have lost a loved one. A few examples include setting up an altar or remembrance tree in your funeral home where people can leave decorations or ornaments for their loved ones. Other examples include advertising in your local newspaper during the holiday to share a list of those who have passed and taking water or other offerings to the cemetery when people prepare their loved ones’ gravesites.

Opening the doors to your funeral home and letting people know you would like to help them honor their loved ones will go a long way in helping you connect with those in your community who celebrate Día de los Muertos.