As the new year approaches, it’s the perfect time to look back at 2018 and the amazing stories we’ve encountered. I have had the incredible opportunity to interview funeral home owners from all over the country this year for Homesteaders’ BluePrint™ newsletter, and each one of them had a story that has stuck with me. Funeral professionals lead very important and busy lives, especially during the holidays when they often have to give up time with their own families to help community members through significant losses.

Owned by Evan and Layla Thayer since 2005, Boultinghouse Funeral Home dedicates itself to helping children in its community by supporting youth and student activities and helping children and families in their time of need. Evan, a licensed funeral director, went out of his way to purchase a homemade ice cream machine for the funeral home. “I love anything mechanical, so years ago I bought a machine that can make 10 gallons of ice cream in an hour. It does it in a way that attracts a lot of attention,” he said. He and his staff take the machine to events to help support local children’s charities. “In the four or five years that we’ve had this machine, we’ve been able to raise tens of thousands of dollars for these charities,” he said. “We have a great time, and it gets me out of the funeral home and into the sunshine.” 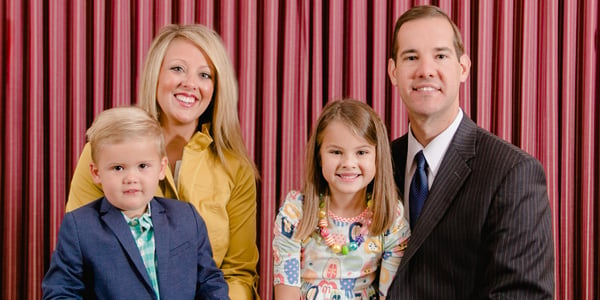 Layla (left) and Evan Thayer with their two children Kendall and Kramer pose for a family photo at Boultinghouse Funeral Home.

Evan and Layla, who have two young children of their own, also have a dedicated children’s room in their funeral home to make the funeral experience easier for the little ones in their community. “Four to six-hour visitations are especially strenuous for a four or five-year-old,” noted Evan. “That’s why I wear a Mickey Mouse watch every day. When you see those little guys, you can show them your watch and say, ‘well, who in the world is this guy?’ The fog surrounding them lifts, and they’ll smile.” 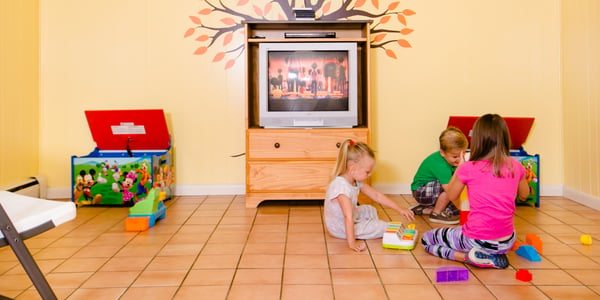 The staff at Boultinghouse has witnessed first-hand the importance of funeral service after a difficult time in their community when four young girls passed away in just six months. “Each year, we have a holiday memorial service for the families who have lost a loved one in the previous year,” said Evan. “That particular year, the family of one of the little girls that passed away came in the side door of our chapel for the service. I happened to look up at just the right moment to see her father. We made eye contact and he smiled. The only other time I had met this family was when their little girl had died. It was such a challenging and heartbreaking experience for them, but to see them six months later and see them smile, you know they’re going to be okay.”

Matthew and Michael Haller of Haller Funeral Home pride themselves on going above and beyond for their client families. They often include a loved one’s prized possessions in their funeral services, and have displayed items like golf clubs, motorcycles, crafts and antique tractors. One of the most touching services was for a local boy who loved monster trucks. “There is a man about 15 miles north of Chillicothe who builds the frames and chassis for most of the monster trucks you see on TV,” said Matthew. “Michael called him to see if he would be willing to bring one of his monster trucks down for the visitation. He agreed without a second thought and refused any form of payment. It was very touching for the family and friends of this little boy to see a monster truck like the ones he loved so dearly in the front yard of the funeral home. His parents also handed out little toy cars to everyone who attended.” 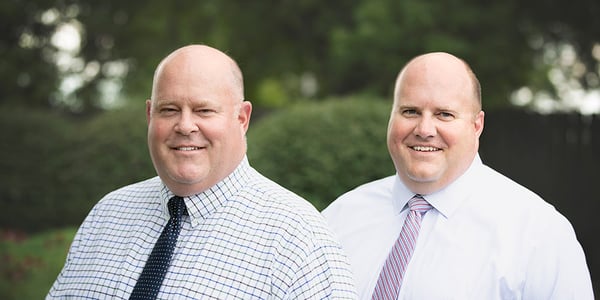 Michael (left) and Matthew Haller are the owners of Haller Funeral Home in Chillicothe, OH.

The Haller family is also very close with their community, participating with local boards and organizations, as well as raising money for local charities. Michael has a knack for cooking and often caters charity events for free, plus he and his father Benney, the former owner of the funeral home, sometimes perform comedy routines that include Michael’s puppet. “When Mike went on vacation one year, he and his family found this puppet. He started playing with it in the store, and the kids were cracking up. He took it to some family events, and it just snowballed from there,” chuckled Matthew. One of the most meaningful connections the funeral home has is with the local coroner’s office. Haller Funeral Home has been performing free removal services for them for the past 20 years. 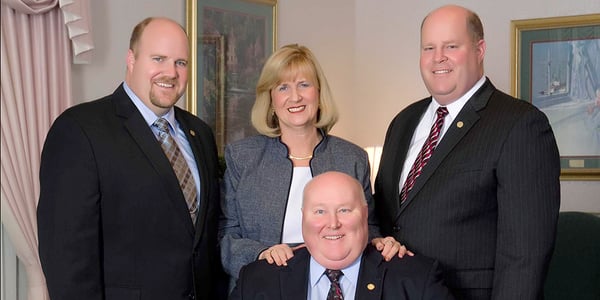 Charles Mathena, a manager and funeral director at Memorial Funeral Directory, has been on both sides of the aisle at his funeral home. In 1992, when his son Chuck was just two months away from graduating from the University of North Carolina Greensboro, he was killed in a car accident. In the aftermath, Charles and his wife Marquetta decided to use their tragedy to help their community by creating The Charles T. “Chuck” Mathena Foundation, Inc., which provides scholarships to students. In 2008, the foundation opened The Chuck Mathena Center, a performing arts venue that honors Chuck’s passion for choir and performing arts. The center provides a place for the funeral home to host their events while also providing a home for community members and students to explore their passions. “We try to give back to the community that has been so good to us,” said Charles. 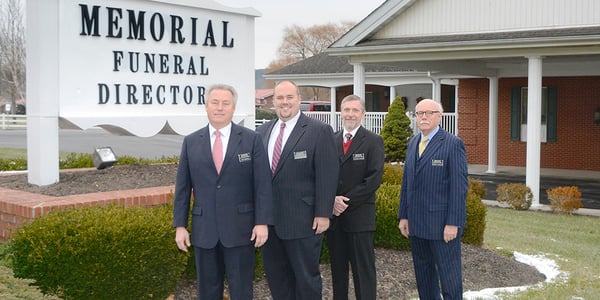 Memorial Funeral Directory is dedicated to the families in their community. They often work with local faith centers to offer bereavement services and they consistently update an online aftercare library. “I hope our families feel that we offered them comfort in the decisions that had to be made, and that they still feel that way two weeks or two months down the road,” said Charles. “I think the greatest gratification I get is when I leave a home after the services is concluded and, whether it’s through a handshake, hug or a look in their eyes, I know we’ve done that best we could and that the family is content with what we’ve done for them.”

Every funeral home that Homesteaders has the honor of working with has stories just like these. From helping a family through the death of their child to making their community a better place through charitable giving, funeral professionals are dedicated to their profession and their client families. Do you have a touching story from funeral service this year? Please share your experiences in the comments to inspire other funeral professionals.